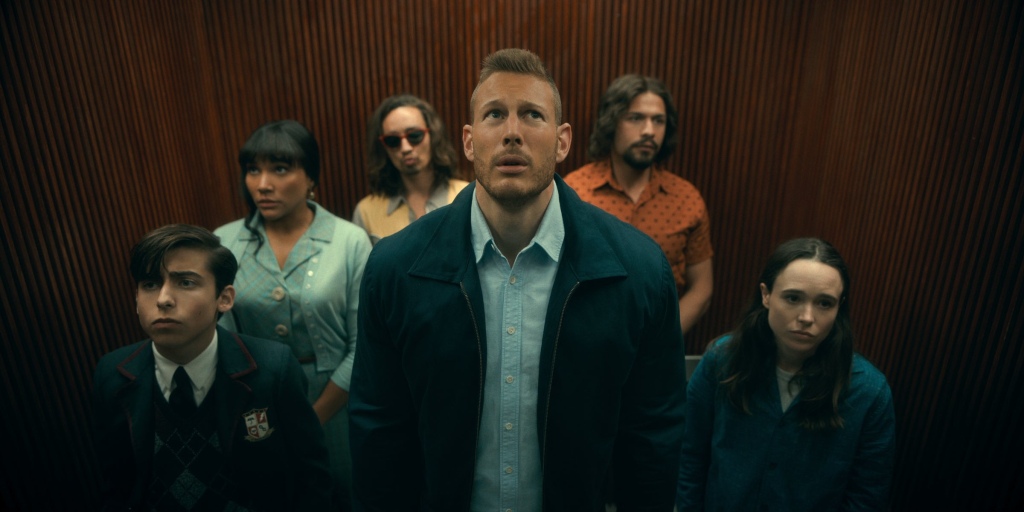 The Umbrella Academy Season 2 dropped for us on Friday just gone (July 31). As one of the more anticipated seasons to come out this year, this season lives up to the expectation and hype.

Reflecting back on season 1 I really enjoyed it as an alternative comic book/hero take. It brought a freshness mixed with maturity and story telling to carve it’s own little space in the over saturated market.

It ended with the team (known as the Umbrella Academy once upon a time) being cast back in time to avoid an apocalypse.

Season 2 picks up immediately where season 1 finished. In fact its one of the best scenes within the season (don’t worry we don’t peak early like a Lindsay Lohan career). It sees the gang back together all super’d up to prevent World War 3 in 1963. This is quickly ended when Nukes across the world go off and end the world, again and everyone is dead.

At the centre seems to be Five (Aidan Gallagher). Five seems to be mixed with time travel and at war with The Commission (like the Doctor Who’s of the world) that seems to end in catastrophe every time.

Throughout the seasons early episodes we see how each member landed at different points in time and adjusted to their new lives. Klaus (Robert Sheehan) had become a leader of a peace cult, Diego (David Castaneda) was convinced he needed to save Kennedy from being assassinated and locked up for it, Vanya (Ellen Paige) was on a farm after being hit by a car, Allison (Emmy Raver-Lampman) was married and a political activist for Black Lives and Luther (Tom Hopper) was an underground boxer working for a crime lord.

Their new lives provided us with much better characters than we saw in season 1. They worked off others to give us more of their development and a look inside their thoughts more. This only adds to the shows world building and our attachment to the characters.

We begin to learn about their vulnerabilities and their motivations. It’s here that the conflict of saving the world and returning from the 60’s isn’t in everyone’s best interests. Many of the family are happy, much to Five’s unhappiness. Five hadn’t considered that some had been in the 60’s for years compared to his days.

Saving the world isn’t so easy for Five. We learn that the assassination of Kennedy and their father seem to be involved in starting World War 3, so he and Diego (and a few others) begin to track down a younger version of their dad to find out what the fuck is going on.

Reginald (Colm Feore) is still a dick, seems he always has been and will be. However we see what he was like before being a mentor (more than a father) to the children. We see he’s shady, mysterious, powerful and how even now he has control over the kids through his years or mental manipulation.

The bar certainly seems to have been raised and met.

As the season moves on we’re treated to some excellent plots and sub plots. We see how each characters lives are bigger than they seem. As the apocalypse draws nearer the events get worse, for everybody. The bar certainly seems to have been raised for this season and it has been met. The series writer Steve Blackman has done an exceptional job.

The story moves at a pace you enjoy, the set pieces of action and violence are well handled and the sombre moments are given the attention they need. The chemistry between the cast is great and shines through. The humour works and feels natural with Tom Hopper leading the way, mostly.

One of the best introductions however is Ritu Arya. She plays a character called Lila that we meet when Diego is in a mental treatment facility. Seemingly a throwaway character she attaches herself to Diego and some of the family to help them prevent the apocalypse. As we begin to learn more about her we see how much of the plot is built around her.

She has great energy and brings a sassy style of humour, something that’s been missing. She also balances out the gender power as most of the male characters feel powerful next to the females.

All in all season 2 is well written, acted, paced, scored and it is refreshing. It builds a lot on what season 1 set in place but for the most part it only adds to it. As a comic book TV series its up there with the best of them, but don’t think it’s like the rest.

iThere are no comments

Begin typing your search above and press return to search. Press Esc to cancel.